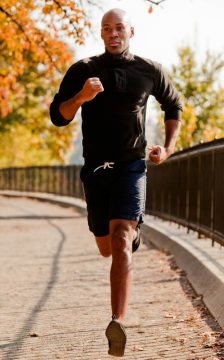 Keen runner and cyclist, Mark*, was busy preparing for the London Marathon when he presented with back and knee pain. His upper back muscles felt tense and he was also suffering from headaches.

After examining Mark I identified a restriction in his upper back which was causing muscular tension in the surrounding muscles including those around his neck. His headaches could also be attributed to his upper back and neck tension – a phenomenon manual therapists refer to as cervico-genic headaches.   He also had a pelvic torsion and weakness in one of his pelvic stabilising muscles which was potentially affecting his gait when he ran and causing knee pain.

I discussed my findings with Mark and how I believed they were causing his symptoms before proceeding. Mark consented to treatment and over the course of three sessions his symptoms reduced to a level that he could continue training and cycling.

I used various treatment modalities with Mark from massage to High Velocity Thrusts (HVTs), aka ‘clicking’ and Muscle Energy Techniques (METs), which involve stretching a muscle after it has been contracted, to loosen the restriction in his back and relax the muscles in his neck. I mobilised his pelvis to address the torsion and gave him strengthening exercises for his pelvic muscles, which helped to resolve his knee pain.

*Patient identity has been changed to protect confidentiality.

I spent several weeks and a lot of money with a physio but never really seemed to find the issue. Sandra performed a very thorough analysis and immediately identified the cause and the effects.  She then spent time talking me through what would need to be done to resolve the issues.  The way Sandra constantly explains each technique and why she is doing each of them is really helpful for me to understand the injury and how to recover from it.

I am back training with a greater mobility, back pain almost gone and a really positive outlook on being back to 100%.
- Mark, 5th May 2016.